Although there are certainly limitations to how much light (or infrared radiation) can be emitted by an LED, there are tricks that can be used to push them to their ultimate maximum limits. This project will demonstrate how a simple infrared illuminator can be "pushed" a little more in order to extend the useful range of a simple night vision system using a camcorder and a low lox monochrome camera. In order to build this project, you will need to have the datasheet handy for the LEDs you plan to use so that you can determine the amount of current the LED will withstand in pulsed mode operation.

Pulsed mode operation means that the LED will be turned on and off at a very fast rate using more current than it could withstand continuously. The purpose of doing this is to force the LED to output short bursts of much brighter light (or infrared radiation) than it normally would, and by keeping the pulse with duty cycle short, the LED will not overheat. Television remotes do this to create sharp intense bursts of modulated light to send out to the receiver, and many low voltage consumer devices do this with visible LEDs to make them appear brighter while at the same time conserving power. A pulsed visible LED may look 10 times brighter, yet consume only half the power in pulsed mode operation. Of course, there are limitations to pulsing LEDs, and you may find that using more LEDs or higher current LEDs to be more effective than using a pulse mode driver.

This project will explore the strengths and weaknesses of the pulsed mode operation of both visible LEDs and infrared LEDs, and compare both using a low lux monochrome spy camera connected to a camcorder and small infrared illuminator.

Most newer outdoor security cameras now include an infrared ring light illuminator to enhance their ability to see in the dark. Infrared light falls just below red on the light spectrum, making up the wavelengths from about 750 nanometers to about 1500 nanometers. This light cannot be seen by human eyes, but it can easily be seen by many video cameras, making it useful as a covert lighting method in night vision systems. A common example of infrared light is the medium for communication between your remote control and television set. The LED on the end of your remote sends out pulses of infrared light which is received by the infrared detector on the TV and demodulated back into data. Of course, you cannot see the pulses because they are out of our visual range, but any video camera that is not equipped with an infrared filter can see this light easily.

Figure 1 shows an infrared LED illuminator ring taken from a small outdoor security camera. There are 17 infrared LEDs arranged in a series parallel configuration around a small hole where the camera lens would be installed so that the light is spread evenly around the field of view. This is an older illuminator, and was also a pulse mode system, which is why there are semiconductors on the rear of the circuit board. An illuminator without a pulse mode driver will not have any semiconductors as it is wired directly to the DC power source, giving each LED its maximum voltage and current all of the time.

You may notice that the semiconductors on the back of the illuminator shown in Figure 1 are completely fried , which is one of the downfalls of having more circuitry - more points of failure. This circuit was either zapped by a nearby lightning surge, or simply gave it up after overheating, causing a massive failure in almost all of the transistors in the circuit. Luckily, the LEDs survived and found their way into my junk collection. I have a very extensive collection of infrared enabled security cameras, and the interesting thing is that almost all of the newer ones have better night vision capabilities and do not use pulsed mode LED drivers. Maybe the manufacturers decided that better LEDs made more sense than pushing lower quality LEDs to their ultimate maximum ratings?

<< More on this and other electronics projects, tutorials, videos and help >>

Posted by AtomicZombie at 9:05 AM No comments:

Some of my spy gadgets - LucidScience forum

"Hi, as this is my first post, I will introduce myself.
I purchased Brad's book 101 Spy Gadgets For the Evil genius two years ago, since then I have made several projects. Here are some. "

Read more and join the discussion: Some of my spy gadgets
Posted by AtomicZombie at 12:12 PM No comments:

"I've been looking with interest at your VGA guide, so firstly thanks for creating it :"  Read more and join the discussion:  VGA guide 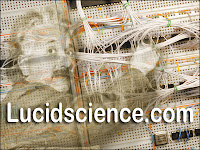 Posted by AtomicZombie at 12:07 PM No comments: 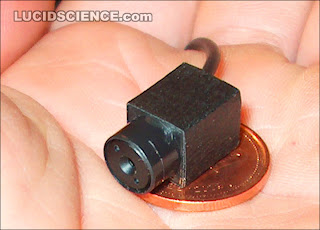 At one time, a decent low light video camera was the size of pop can and cost several hundred dollars. Now, you can purchase a decent micro spy camera that will fit into a marker lid for well under a hundred dollars. Tiny security cameras also offer a huge variety of lenses to allow for practically about any angle of view and covert installation. These cameras are also very easy to connect since they have used the same basic video standard since the invention of the television.

This introduction to security cameras will give you the required basic information needed to install and power up practically any type of security camera.


I use these small video cameras for security work, machine vision experiments and robotic projects. They range in size from half an inch square to a quite large depending on the features, imaging system, and type of lens installed. For most security installations, a small board camera with a fixed medium to wide angle lens will be perfect, but there are times when you need to see a much larger area or over great distances, so these cameras have several body types that allow the use of multiple lens styles.

Extremely tiny spy cameras will not have this option, as they use a very tiny glass or plastic lens built right into the housing. There will be a bit of a trade-off between image quality and size. 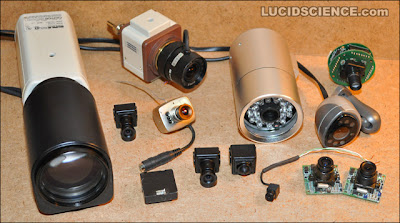 For most covert work, size will be the key factor in camera selection, so you probably won't be dealing with multiple lenses or even have a choice. In Figure 1, you can see the huge difference in size between the long range motorized lens telephoto camera on the left and the tiny spy camera at the front of the photo. The tiny spy camera has a simple fixed medium angle lens and will run from a 6 volt power source for many hours. The larger camera uses a computer to control the motorized zoom lens and requires multiple power sources and electronic control systems in order to operate.

Of course, the zoom lens can see the color of your eyes from 500 feet away, but the tiny spy cam can be hidden just about anywhere. There will always be a camera available to suit your needs as long as you have the budget to afford it.

<< Read more about this tutorial >>

Posted by AtomicZombie at 11:48 AM No comments: 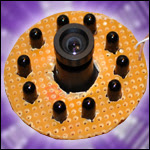 Infrared LEDs are invisible to humans but visible to security cameras

Infrared light falls just below red on the light spectrum, making up the wavelengths from about 750 nanometers to about 1500 nanometers. This light cannot be seen by human eyes, but it can easily be seen by many video cameras, making it useful as a covert lighting method in night vision systems. A common example of infrared light is the medium for communication between your remote control and television set. The LED on the end of your remote sends out pulses of infrared light which is received by the infrared detector on the TV and demodulated back into data. Of course, you cannot see the pulses because they are out of our visual range, but any video camera that is not equipped with an infrared filter can see this light easily. 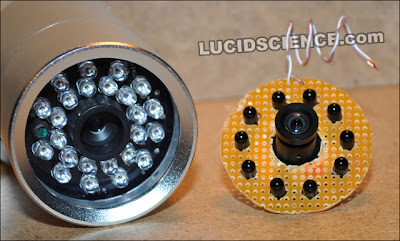 There are many good quality security cameras available on the market that include a low lux video camera in a weather proof housing along with an array of infrared LEDs for night vision applications. Of course, you may want to just make your own simple infrared illuminator for projects that you need to add night vision to. This can be done in a few hours with a few dollars worth of infrared LEDs. Black and white security cameras and small board cameras are particularly sensitive to infrared light. These ultra low lux cameras can usually be purchased for about $100 or less, especially from online sellers. Add 10 or more infrared LEDs, and you now have a night vision system that is better than those that were selling for thousands of dollars in the 1980s.

This project represents the most basic LED illuminator possible, and is nothing more than a series string of LEDs running from a DC power source or battery pack. You can build this infrared illuminator from a single LED and coin battery, or add as many LEDs as your power pack can handle. With 10 LEDs, you can easily light up a room for a video camera, and with 100 LEDs, you could light up your entire yard to make is seem like midday to a security camera. Our Night Vision Viewer projects also use infrared LEDs as an invisible light source. 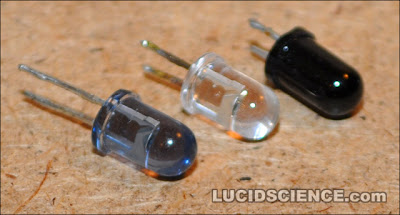 << Read more about this and other DIY electronics projects >>

Posted by AtomicZombie at 11:27 AM No comments: 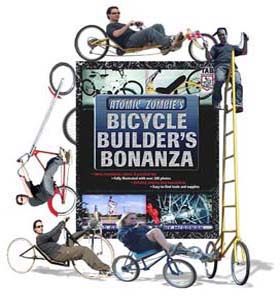